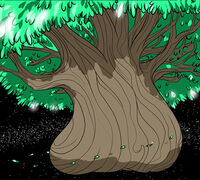 A praeses (plural praesides) is a powerful entity or intelligence.

Their precise nature is still unknown, but Alice referred to them in Comic 68 as "lovely thinking trees" which would seem to suggest that they may be actual trees (albeit, sentient ones with near-omniscience). Alice was in the middle of an argument at the time and her tone could be construed as sarcastic, so this remains unconfirmed.

There is further evidence in Comic 69 that the Praesides are actually trees. Gavia refers to the First Praeses Archaeopteris being created, the other Praesides growing from him/it, and the collective Praesides being considered a forest (the Forest is also considered home).

This section borrows heavily from the Wikipedia article on 'praeses'.

Praeses (plural praesides), is a Latin word meaning "placed in front of, i.e. at the head", and has both ancient and modern uses. Praeses was an ancient Roman description for provincial governers. Although it came about through euphemisms such as qui praeest ("he who presides"), it was an official term by the 3rd century.

The individual praesides themselves are all named for families or genera of tree species.

Whilst the exact nature of these beings has yet to be confirmed, both Alice and Gavia use language to refer to them and their actions that is heavily loaded with arboreal metaphors.

Speculation — The following material is not confirmed.

While the praesides would appear to be extremely powerful intelligences, it is unknown whether they are considered sentient. Ardent and Gaiva both address Cupressaceae by name, but both also refer to Cupressaceae as "it" [1] [2], indicating that despite possessing names and apparent sentient characteristics, the praesides may be considered non-sentient.

The praesides are evidently the keepers of order in the habitat and in the world beyond. They appear to all have responsibility over the various inhabitants of the world as individuals. Amongst other things, Alice states outright that they monitor individuals behavior and will prevent them from breaking the laws of the wider world.

Gavia's behavior towards the end of Chapter 1 strongly indicates that the praesides have some ability to monitor their charges at all times, as she clearly expects Cupressaceae to respond to her request for extraction. This sequence also implies strongly that the Praeses have access to some form of teleportation technology.

Archaeopteris was the First Praeses, created by Ardent and Gavia's ancestors. From Archaeopteris grew the other Praesides until a whole forest was born (Comic 69).

Retrieved from "https://alicegrove.fandom.com/wiki/Praeses?oldid=5377"
Community content is available under CC-BY-SA unless otherwise noted.